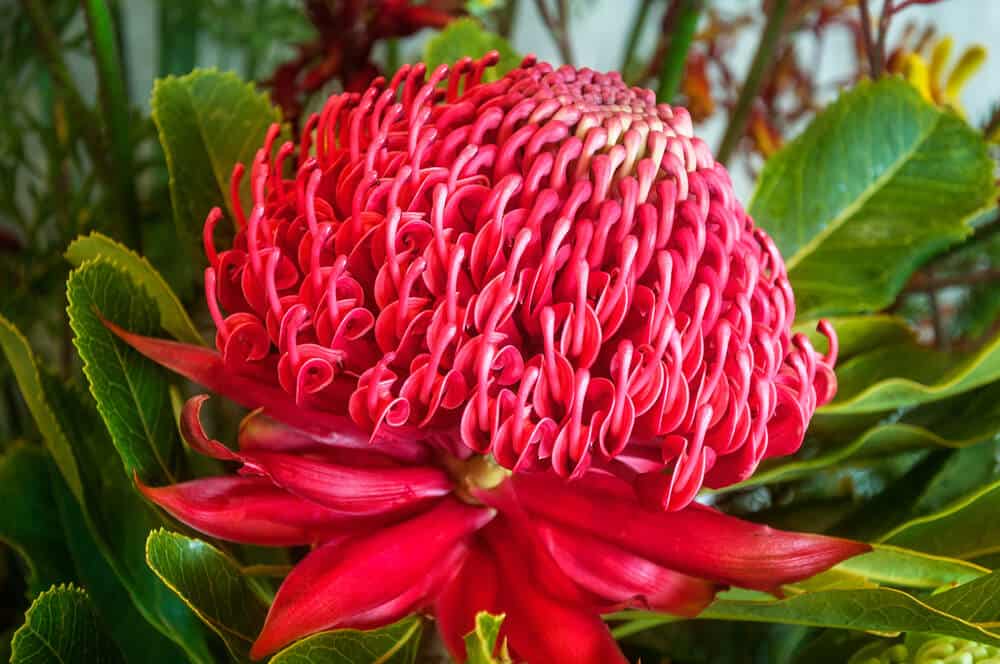 As one of the most iconic Australian flowers, you could probably recognise the waratah on sight. There are actually five species of waratah, but the most common and well-known is the Telopea speciosissima – the New South Wales waratah, the floral emblem of NSW. It’s one of many Australian native flowers, but possibly one of the most popular.

(While they’re very pretty, though, don’t pick wild waratah flowers off the shrub!)

Can you grow these native plants in your backyard? Absolutely! Caring for the waratah (NSW waratah or otherwise) is a little tricky, but it’s well worth the work. Plant your waratahs in free-draining, sandy soil that’s slightly acidic. They require little water once established, but don’t let the soil dry out either. Waratahs like morning sun, but minimise exposure to the strong afternoon sun. There’s little need for fertiliser, but if you want to give them a boost in the growing season, make sure to use one with as little phosphorus as possible.

Waratah waiting for? If you want to know how to grow waratahs – or how to take care of waratah plants – here’s a rundown of flower facts and care guides!

The waratah is a flower of the Telopea species. This red flowering tree belongs in the Proteaceae plant family – meaning they have special ‘proteid’ root systems designed to survive in nutrient-deficient soil. In spring, they produce their signature bright red flowers (although some cultivars bloom in while, pink, or yellow) – or clusters of flowers, actually! Each ‘conflorescence’ is made up of tens to hundreds more flowers, all arranged around a centre.

Besides the New South Wales waratah, there are four other species of waratah:

Both the NSW waratah and the Monga waratah are the easiest to cultivate. There are also hybrid waratahs, which are a cross between the two, including:

The NSW waratah is the floral emblem of New South Wales. It’s one of the most widely-known and admired waratah varieties. This classy shrub produces bright red flowers in late spring, which attract plenty of bees and birds during its flowering period. It’s often depicted in statues and building exteriors, as well as paintings, sculptures, all the way down to tea towels.

The waratah plant likes partial shade with morning sun, although it can also grow in full sun. Make sure to place it somewhere it doesn’t get too much exposure to the harsh afternoon rays.

Waratahs grow best in temperate and cooler climates, as they are fairly frost hardy. They are poor companion plants, though, and should not be planted anywhere near any eucalyptus.

How To Grow Waratah

For waratahs, seedlings can take about five years before flowering, while cuttings can bloom as early as two years later. Waratahs grown from seed can take far longer, but makes for easier cultivation.

The easiest way to grow a waratah is from seed, although it takes plenty of effort. The seed pods mature after six months on the plant, at which point they turn brown and break open.

To grow waratah from seed:

You can also strike waratahs from cuttings! Prune from your existing waratah, or ask a friend – but don’t pick public plants. You won’t get good blooms from anything growing wild, and you’ll deprive people of a beautiful natural view.

Growing waratah in a pot

Growing a waratah in a pot is similar to growing it in the ground. Choose a pot that is twice as wide as your seedling, and place it somewhere partially shaded that gets the morning sun.

Fill the pot three-quarters of the way with a free-draining potting mix. Carefully remove the plant, and tease the roots (gently!) if necessary. Position in the pot, then backfill while firming down lightly. Water well, and lightly mulch if you prefer. Repot if the root ball begins to outgrow its container.

Like many Proteaceae or proteid plants, the waratah reacts badly to general purpose fertilisers due to the phosphorus content. Proteid plants have specialised roots that spread out in a fine mass, drawing nourishment from nutrient-deficient earth. Fertilising with products containing phosphorus could be toxic to your plants’ development. Opt for low-phosphorus mulch or blood meal fertiliser – if you need to fertilise at all.

When the plant is establishing itself, do not let the ground dry out around your waratah. Conversely, don’t over-water either – the waratah doesn’t like wet feet!

Mature waratah plants will need regular pruning to maintain their health and appearance. Trim off any weak stems as you notice them. Then prune the branches down to 1/4 their length after the flowering period. This will encourage new growth and more flowers the next season. If you’re unsure of how to prune your waratah, enlist the help of a garden maintenance service to look after your plants!